A DAY IN THE LIFE OF AN ORGANIZER
This is one of my most interesting stories so far.
My little five year old girl was playing outside in the back yard the about a week ago, and when she came into the house she left the basement door WIDE open. I didn't realize this of course, and went to a meeting that night. I came home late after everyone was in bed. The next morning I was vacuuming and kept feeling a draft by the stairs. I went down to find that the door had been open ALL NIGHT!! My husband, nor I had bothered to check that it was locked before we went to sleep. A mistake that won't happen again! I was immediately concerned that we would have mice.

Sure enough a couple of days later the signs started to show. First, their was the package of Hershey's candy bars that the mice gorged themselves on. Then we found evidence that they had found my chocolate chip stash and had taken a particular fancy to the butterscotch flavored ones. I neat little hole had been chewed out of two bags. The greedy little mice hadn't even finished off one bag before they started into the next. I threw the bags away and checked the mouse poison I had left for them as a special treat. Most of that was also gone. Good, I was well on my way to killing the little heathens! 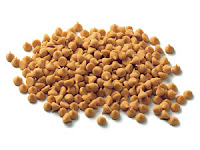 A couple of days later I pulled out a camping chair and took it outside. I wanted to sit and read while my kids played Michelangelo on the driveway with sidewalk chalk. When I pulled the chair out of its case, a whole slew of butterscotch chips came out with it. The stinking little mice had been stashing the chips in the camping chair! I swept most of them off of the driveway, but a few remained.
The worst is yet to come...
I went around to the back of the house to help my daughter with something, and when I came back to the driveway, my two year old son was just gobbling up the rest of the butterscotch chips that I had missed. I about threw up! After contemplating rushing him to the emergency room to have his stomach pumped, I decided he would probably be okay. So far no symptoms of sickness, and he has yet to grow mouse ears or a tale. But boy was I GROSSED OUT!!

Email ThisBlogThis!Share to TwitterShare to FacebookShare to Pinterest
Labels: A Day In The Life Of An Organizer

Dimples In Time Around the World

Free yourself from the clutter that surrounds you!